Hello all and welcome to the Apothecary! The following book review is for a novel that was passed on to me for review by the publisher, Tyche Books. To really see all the detail in the cover, you should click on it and view it full sized. The smaller versions don’t do it justice in the slightest.

“Demons are invading the Midlands for the first time in centuries.

The farmers have no defences against the murderous creatures. Swords in the hands of ordinary soldiers have no effect against demons, for the ability to resist a demon’s power – a projection of paralyzing fear – cannot be taught.

Garet’s life is forever changed the night his midlands family is attacked. Demonstrating a rare talent for resisting demon fear, Garet is taken to the city of Shirath to become a Demonbane: one who can withstand the demons’ psychic assault, trained in combat, and learned in demon lore.

But the ancient city isn’t a safe haven, it’s a death trap. While opposing political forces vie for the throne, a new demon terrorizes the citizens. To save Shirath, Garet must find friends and allies quickly, because the biggest threat to the city isn’t the demons, but the people living within the city’s walls.”

‘City of Demons’ is the debut novel of indie fantasy author Kevin Harkness. As with any new author I wasn’t sure what to expect and picked up the book with a degree of hesitation. I was pleasantly surprised. It wasn’t the dark, gore filled fantasy that I was expecting.

It’s a rich story set in a unique world and filled with interesting glimpses into the human mind. It delves into how our past experiences and how we deal with them can affect our ability to overcome fear. I noticed a tiny bit of steampunk-ish influence in the novel, which in my world is always a fun discovery.

That being said, it is not a difficult story to follow and I found it both entertaining and easy to read. I have no doubt that Kevin will only improve as an writer and I would happily read any novels that he might release in the future.

Download ‘City of Demons’ as an ebook on Smashwords, Amazon, Barnes & Noble and Kobo Books.

or purchase the paperback on Amazon and Barnes & Noble.

__________________________
If you enjoyed this post, why not Subscribe to the Ebook Apothecary!
I stumbled across some pretty sweet news today. Not only is there a self-published fantasy author in my own town – she also happens to work for the same company that I do. Actually all things considered I’m a little blown away by the fact that I didn’t discover this detail a whole heck of a lot sooner. (My own fault for not spending more time talking to people!)
Iron and Wine by Candace Osmond 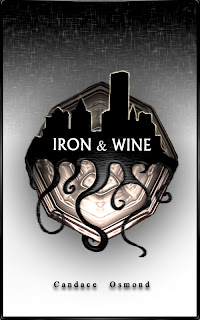 “Iron & Wine is an Urban Fantasy novel set in a world full of hidden magical places and secret societies cloaked by modern day. In the first instalment of the Iron World Series, young artist Avery Quinn reluctantly leaves behind her quiet and comfortable home in the country and moves to the city with her best friend Julie Ryan. With the expectation that college will be the most exciting part of her life, Avery hopes that her little world remains quiet and simple. But after a troublesome blue sprite looking for help appears in her bedroom one night, her boss turns out to be a three hundred year old vampire, and her best friend accidentally reveals herself as an orphaned pixie, school quickly becomes the least of her worries. Every aspect of Avery’s life explodes with mythical beings and legendary creatures who all play a very important role in her existence. Some are friends, some are guardians, while others quickly become life threatening and deadly enemies. Avery must learn to juggle living in both her world and theirs. But, in this magical tale of strange love, strong bonds and scary beings; what once was nothing more than mere fairy tales told to her by her Aunt Tess are now a scary reality and Avery has somehow landed deep in the middle with little or no way out except death or worse…the loss of her humanity.”

This novel is currently only available as an ebook – but never fear, Candace has the paper and glue variety in the works as well. In the meantime I definitely encourage you to check out her novel on Smashwords, Barnes & Noble, Kobo Books or Amazon. It’s currently free to download as well, except on Amazon. (If you do happen to read it be sure to go back and leave a review!)

In addition, she will be giving away a signed copy when she hits 500 followers on Twitter so go follow @candaceosmond while you can!