Welcome back to another of our posts featuring Charlotte E. English, author of the Draykon series.

Rikbeek, a non-human character in her novels, is really the one getting all the attention though. Yesterday we gave him a chance to say a few words in the Character Interview and today Charlotte has given me an excerpt from the third Draykon novel, Orlind, which will be released on April 30th. It was a great choice on Charlotte’s part as it’s fun but doesn’t have much in the way of spoilers in it. Of course, Rikbeek kindly makes an appearance for us in this scene!

If you haven’t, be sure to enter Ritesh Kala’s giveaway for the books in this series, including the yet unreleased Orlind.

“A day or so later, Eva emerged from her room to find Tren already waiting for her.

She quickly hid her tiredness and mustered her usual smile for him. She’d slept for days, or that’s what it felt like, but her body still ached with weariness. Too much PsiTravel in a short space of time took its toll.
‘Good morning,’ she said. ‘I think.’
Tren returned her smile, but then his gaze travelled downwards and the smile disappeared. His eyes widened. He said something inarticulate, then coughed. ‘Uh. Is it the “good” part or the “morning” part you’re unsure about?’
‘Maybe both,’ she replied, her lips twitching. Tren’s eyes still hadn’t managed the long climb back up to her face.
‘Wh… what are you wearing,’ he said faintly.
‘Trousers.’
‘I can see that, yes, but…’ He swallowed. ‘Wh-where did those come from?’
‘I took a pattern from Llan’s.’ Llandry habitually wore trousers, of a pretty style she’d said was popular in Nimdre. Hers were fluid, with lots of soft fabric, and they were gathered in at the ankle. Good for flying, Llandry said.
Well, Eva didn’t have wings so flight wasn’t her concern. Running was. If she had to flee for her life again anytime soon, she didn’t want the hem of her customary long skirts working against her. So she’d avoided loose, billowy fabrics altogether. Her modified trousers were sturdier, flexible… and somewhat more closely fitting.
They were much more practical, but she hadn’t considered the potential effect on Tren. Women in Glour didn’t usually wear trousers: skirts were much more common. Long skirts, with layers and lots of fabric to hide everything under. Her new trousers, on the other hand, outlined her curves in some interesting ways.
‘I think I understand the new game plan,’ Tren said weakly. ‘Fatal distraction.’
‘Think it’ll work?’ She turned this way and that, checking to see how the new trousers looked from various angles.
Tren backed away. ‘I, um. Think I left something. In my room.’
He fled.
Grinning, Eva began to walk after him — then stopped when something hit her back, impacting with a solid thwack. The same something whizzed past her ear, bestowing a vicious fly-by bite upon it on the way past. 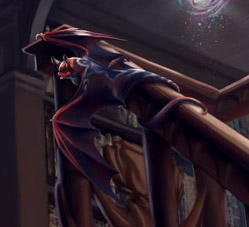 Rikbeek. He’d kept up a steady grumble of protest ever since he had discovered that her skirts were gone. No more draping folds of fabric to hide in, no shadows for him to conceal his dark little self in. He’d made a pretty good effort to hide in her trousers, and finding that futile he’d retired to the ceiling, grumbling all the way.
It seemed he would like her to understand that she was not forgiven.
‘Little wretch,’ she muttered. Touching the tip of her right ear, she found blood.
‘Plague,’ she added.
Rikbeek’s response resounded in her thoughts. His mutterings never resolved themselves into meaningful communications in her mind, but she had no trouble understanding the gist. For every name she called him, he had worse to say in return.
‘I’ve a blouse,’ she offered. ‘Quite a lot of fabric in that. There’ll be a coat, too, later on.’
No response.
‘Fine. Try to keep up.’ She set off down the corridor, Rikbeek stubbornly maintaining his station near the top of the wall. But when she was almost out of sight, he peeled himself off the plasterwork and charged after her.
‘Good plague,’ she smiled. ‘I’m probably going to need you.’
Devary had been given his own room, of course, like the rest of them. The Library certainly wasn’t short on space. But he’d taken to spending most of his time among the bookshelves, specifically those relating to musical studies. He had spent many hours there, before he’d left the Library for Rheas’s house. Eva wouldn’t be surprised to find he’d gone straight back there upon his return. She made for the music libraries at once. Rikbeek shadowed her, flying a few feet behind as though to suggest he wasn’t really with her.
Ah well. He’d get over it eventually.
Tren caught up with her along the way.
‘Found it?’ she asked.
‘What?’
‘Whatever it was you left in your room.’
‘Oh.’ He flushed. ‘Yep. All set.’ He paused. ‘So you’re wearing those?’
Eva looked down at her legs. ‘Apparently.’
Another pause, then he said, ‘Let’s hope Devary has a strong constitution.’“
***
… you know you want to read it!

You can find Draykon (Book 1) for sale at Amazon, Smashwords, Barnes & Noble and Kobo Books.

The schedule for this featured author week is as follows:

And don’t forget to ENTER THE GIVEAWAY!!