As you may know, we are currently featuring ‘Florence’; a YA Fantasy novel by Ciye Cho. Later in the week we will have both an author interview and a review for you, but for now here is a super short little excerpt from near the beginning of the book! I swam ahead, far beyond the others.

The shore dipped off to reveal a hidden world. Overlapping plates of coral formed the terraces of an underwater kingdom. Anemones of neon abounded everywhere, steeples that rose and fell as clownfish bustled within them. The light that passed through the ripples gave the reef the glow of a mirage.
It was impossible not to blink.

A red brain coral came into view, and tiny crabs made their way through its maze of grooves. Sea stars lay everywhere, sunning themselves in the honeyed light. I floated facedown along the water’s surface. None of the animals noticed me, but that suited me just fine. Each creature had its own natural behavior—groupers moved slowly; clownfish hid in their anemones—and here, I reverted to what I did best.

I observed the world.

I pulled out my underwater camera from the side pocket of my jeans. The SeaBrite was a tiny gizmo, four by two inches in size. Its case was made of turquoise plastic, and it had a viewfinder at the top and an LCD screen at the back. I turned on the camera and took snapshots of the reef.

A creature of brown and gold rushed past me. It had a reed-like body with a curled tail, a pointed snout, and several petal-shaped fins. A sea dragon? It slowed around a gathering of sea ferns. I took in a deep breath, then reached above the water to flip down the cap on my snorkel. I swam below. The water here was stained a dark blue, but I found my way to the ferns. Pinned to them was the sea dragon. I took a photo of it as it glimmered in the light.

The water darkened as another shape rushed past. The sea dragon raced off and all the other fish retreated into the nooks of the reef. A shadow fell across the corals, and I put my camera back into my pocket and turned around.

A man was floating amid the reef. This ebook can be currently found on: Smashwords and Amazon.
… and the paperback on: Amazon and the Author’s Website.

If you are interested in getting your hands on a copy, you can also enter to win 1 of 10 that we are giving away until July 14th, 2012! 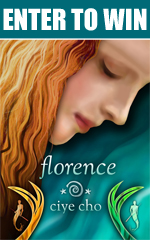