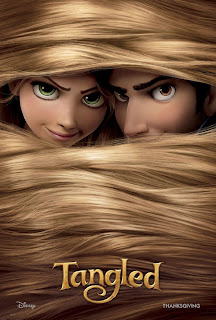 When I saw the preview for Tangled I knew immediately that I had to see this movie. Didn’t matter that it was meant for kids, the chameleon stole my heart in one tiny instant.
My greatest fear was that all the good bits would be in the preview – this happens far too often for my tastes.
They weren’t. As hilarious as those bits were, they weren’t even the best part of the movie! It was cute and funny with the perfect dash of “awww”! All the qualities you want to see in a Fairy Tale packed in one fantastic movie.
One of the best things about it is there is no really scary villain in this movie. She’s about as scary as Gaston in Beauty in the Beast. (So pretty much not scary at all!) Tangled would be perfect for any younger kids who have problems watching the scarier stuff.
Finally. Disney you have done it. You’ve created a movie that is as good as your classics.
I’m even going to buy this movie, that’s how much I love it!
6 Stars for Tangled!

Today you’re going to learn far more about the role of frogs in fairytales than you ever thought possible.

Typically, the first image that would pop into your head when you associate frogs with romance would be the well known Frog Prince. A frog in a pond, a Princess that isn’t spooked by said talking frog, a little slime, a little kiss and VOILA a Prince for everyone! However, the story isn’t always so pleasant. In the original stories, and the one made famous by the Brothers Grimm, a little slime was perhaps one of the more attractive parts of the story. The Princess is a snotty little thing who is unwilling to keep an agreement with a frog. She disdains him, is disgusted, and there is certainly no kiss for the poor abused amphibian. Rather, it is only when the Princess throws the frog into a wall that the transformation back to human takes place. In subsequent renditions it actually manages to get worse, the Princess actually has to chop the frogs head off in order to return him to human form.

I must admit I’m alright with the fact that Disney decided to go with the more modern variation of the tale.

So there you have it folks, a ribbeting tale of Froggy Romance…