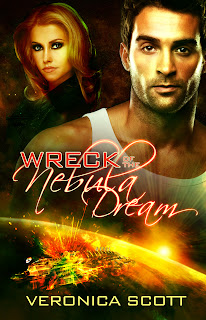 Traveling unexpectedly aboard the luxury liner Nebula Dream on its maiden voyage across the galaxy, Sectors Special Forces Captain Nick Jameson is ready for ten relaxing days, and hoping to forget his last disastrous mission behind enemy lines. He figures he’ll gamble at the casino, take in the shows, maybe even have a shipboard fling with Mara Lyrae, the beautiful but reserved businesswoman he meets.

All his plans vaporize when the ship suffers a wreck of Titanic proportions. Captain and crew abandon ship, leaving the 8000 passengers stranded without enough lifeboats and drifting unarmed in enemy territory. Aided by Mara, Nick must find a way off the doomed ship for himself and several other innocent people before deadly enemy forces reach them or the ship’s malfunctioning engines finish ticking down to self destruction.

But can Nick conquer the demons from his past that tell him he’ll fail these innocent people just as he failed to save his Special Forces team? Will he outpace his own doubts to win this vital race against time?”

I know the official view is that this novel is a re-imagining of the Titanic disaster – but set in space; however I feel that I need to clarify things just a little. The very, very basic premise is the same. There is a ship on its maiden voyage that definitely doesn’t reach its destination due to an unforeseen accident, this is very true. However there isn’t much more that is the same. It isn’t like the movie and it certainly doesn’t involve a man dying so that his lover can have the last escape pod (in which they obviously both would have fit).

Before I began reading this book I was under the impression that it was a straight-up romance. Maybe because I saw the man and woman on the cover and jumped to the conclusion that lots of clothes would be coming off. Either way, I was wrong. The novel might have romance in it, but it is much more than the sexually driven sci-fi romances that you typically see. This novel is for science fiction fans first and romance lovers second!

The light romance is very clean; don’t worry boys, you won’t have to sit through any painful sex scenes or endure any combination of the words ‘throbbing’ and ‘member’. Just lots of action and fun twists and turns!

I think what will draw people to this book is that even though it is sci-fi, it is the easily digestible variety. There isn’t 13 chapters of technical information that you need to get through to fully understand the technology and society. The science aspect is kept basic and the details of the technology aren’t a focus. Rather than making the story less believable it makes it quite easy to get lost within the story; the technical jargon isn’t constantly jarring you out of it.

The characters were fun; ladies will love the fact that the heroine is the competent and capable variety – she’s no helpless maiden relying on her looks to get the job done. In fact, all four of the main characters are each unique in their own way. The military man, the high-class socialite, the warrior and the business woman.

While the story ends cleanly, I found myself wanting to know more about Khevan and his mysterious brotherhood – it seems that there is another story there just waiting to be told. (And I would definitely read it!) Victoria builds an interesting universe; I could see many more stories taking place there.

There is some violence and graphic imagery but it isn’t over the top; though it’s definitely an adult novel.

I would love to see a few people pick up this book on Smashwords and leave a review; it is newly published there and could definitely use the boost!

You can currently enter to WIN THIS BOOK and 3 $10 Amazon Gift Certificates. All you need to do is go to my giveaway and enter! The contest is open internationally – should you decide to pick up and review this book you will get extra points in the giveaway so be sure to come back. (You can also enter a variety of other ways, so don’t miss out!)

You can purchase this book on Amazon, Barnes & Noble and Smashwords (multiple formats)!

21 thoughts on “Book Review: "Wreck of the Nebula Dream" by Veronica Scott”